Before the curtain went down on large-scale gatherings, concert halls closed for business and ‘live’ music turned into another online experience seen from our devices at home, I had the great fortune to see some truly amazing performers last year. While 2019 had its ups and downs for me, in pandemic-hindsight there were some truly unforgettable occasions I can’t wait to try to replicate when all this fear and sadness ends.

In the meantime, just wanted to share what I still can’t believe I got to experience last year, for which I’m forever grateful. Music is the great healer for me and many others, and when you add passion, inspiration and mind-blowing talent and entertainment … well, all I can say is, ‘WOW’!

So, without further ado, here’s a brief recap of my most magical musical moments of 2019 (good alliteration, right?!) … (By the way, I know ‘ado’ doesn’t look right, but I looked it up and ‘ado’ and not ‘adieu’ is grammatically correct, according to my online sources — 😉).

Billy Joel at Madison Square Garden (MSG), NYC (April or May 2019) – We finally got to see our hometown Long Island hero perform in one of his always-sold-out regular performances he’s been doing here for the past few years. I’ve seen him a couple of times in the past, but this time it hit me how enduring his talents are and how beloved he is by people of all generations.

He started off with a blistering rendition of “Big Shot” and finished with ‘We Didn’t Light the Fire.” He had special surprise guests Tony Bennett – singing “New York State of Mind” to Billy’s piano – and young Chinese piano prodigy Lang Lang playing a duet with him of an instrumental classic I always loved from Billy’s Turnstiles album back in 1972, called “Rootbeer Rag.” (I did have to explain to a young man next to me just how special Lang Lang is, but he seemed to appreciate his ‘chops’ once he started playing.)

Overall, I can’t describe the electricity in the air from start to finish and the way I was moved to chills throughout. I remembered how my admiration for Billy Joel began in my high school bedroom late one Saturday night, watching him sing “Piano Man” for the first time, in signature suit, tie and sneakers on Don Kirshner’s Rock Concert.

I knew he was something special then and I knew, more than ever, he still is.

(My other Billy Joel concert experiences were back in the ‘80s for the Glass Houses album tour with college friends, again at MSG, and another concert at Nassau Coliseum in 2009. He had just released River of Dreams and, having bought and memorized most of the CD, I was super excited to hear the new material. Turns out, he did a mostly nostalgia concert instead, which, of course, is fantastic too. I later found out he was on the verge of publicly splitting up with Christie Brinkley and surmised that’s why he didn’t sing many of the love songs about her from that album. Anyway, it was a snowy December night and worth the slippery ride and bitter cold walk across the parking lot!)

Brandi Carlile at Madison Square Garden, NYC (September 2019) – I fell in love with

Brandi Carlile when I heard her perform “The Joke” on the Grammys a year or two ago and the more I hear, the bigger a fan I become. She is the consummate singer-songwriter. The whole package. She’s deep, she’s melodic, she’s got endless range and she’s a great guitarist and pianist. Her band is (forgive the expression, but …) kick ass! And she’s a powerful champion of women’s and LGBTQ rights, in her music and her life. Inspiring is the word I’d use all around.

Amazingly, shortly after “discovering” her, I saw she was playing at MSG and we quickly secured tickets with good friends.

It was her very first headline concert at a massive venue like Madison Square Garden, she told all of us in the revved-up audience. She even broke down and cried when we went crazy after her first, rousing song.

Special doesn’t begin to describe it, nor the fact that the incredible 80-something-year-old blues legend Mavis Staples was her opening act, if you can believe that. (Brandi couldn’t!) They sang together too and as if all that wasn’t enough, Brandi also welcomed on stage somewhere in the middle of the concert, her fellow ‘Highwomen’ band friends — Natalie Hemby and Amanda Shires (married to another musical idol of mine, Jason Isbell, who I think might have been playing the guitar with them as he sometimes does, I couldn’t quite tell). Only Maren Morris, unfortunately, wasn’t there.

The concert went on and on, yet felt like it was over way too soon. We couldn’t get enough of the alternately high-powered rock and roll (with Brandi’s lifelong friend, twin brother electric guitarists in full form) and heartfelt ballads. She left it all out on the stage, as they say, with endearing stories all along the way of how she made it to this iconic stage from her humble beginnings in Seattle.

We will definitely try to see her again but, in the meantime, I continue to collect her music and am a devoted listener and forever fan.

Robert Earl Keen (and Shiny Ribs) at Town Hall, NYC (December 2019) – And finally, in December, on a Thursday night, (which also happened to be my birthday!), I had one of the greatest celebrations of all, seeing one of my all-time favorites, Robert Earl Keen, as I’ve blogged about before. In this particular show, he saluted the 50th anniversary of the Walk on the Moon with iconic 1960s, ‘70s and ‘80s songs (mostly space related) mixed in with his normal repertoire and band members dressed like David Bowie, Elton John, George Harrison and even Michael Stipe of my favorite REM band fame. 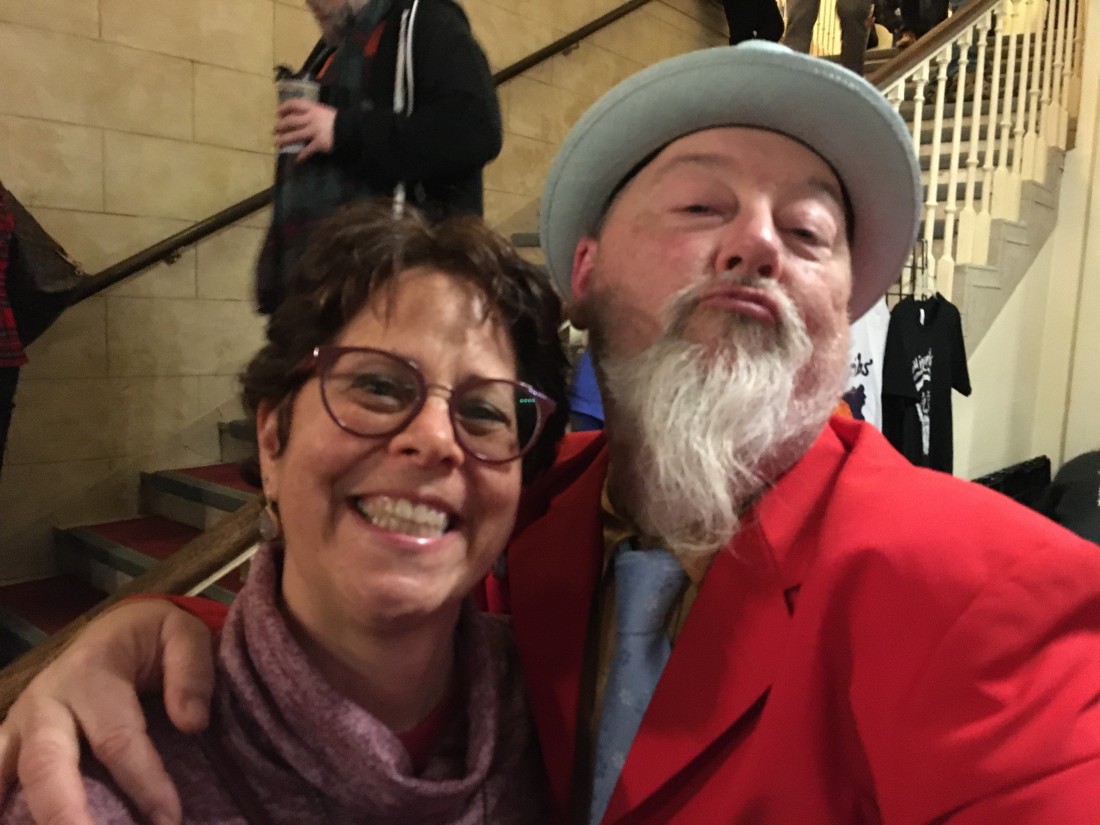 The opening act, a band called Shiny Ribs, has become a new favorite band of mine. (Google them if you want.) They call their genre country soul swamp funk (how cool is that???) and frontman/singer songwriter Kevin Russell is as entertaining as they get. He’s a bald, chubby, long gray-bearded guy who has a kind of leprechaun look about him and a thick Louisiana drawl. He moonwalks and dances around like nobody’s business, often in outfits like bright purple suits with green shirts and a bowler hat. He’s got an incredible band that’s PURE FUN – with two female singer-dancers, a drummer, a piano player, a saxophonist and trumpet player (who alternately play other instruments like flutes). It’s high energy all the way and the kind of unique, quirky, hard-to-describe or replicate lyrics, rhythm and sensibilities. He just knocks me out and, as you can see from the pic, I got to meet him for a quick photo op during intermission!

So those are my 2019 music memories … hope we all get to hit the concert halls, safely, happily, again some time soon! And on that note … take good care!