I woke up the other morning feeling pretty down. I had a little (or not so little) crying bout, acknowledged all my fears and concerns, and came to the same conclusion I’ve been coming to lately. It’s o.k. to feel out of sorts during a pandemic, especially if you have other troubling things going on in your life. In my case, that includes the recent passing of my dad and a close friend, and some current (though thankfully treatable) health challenges with my daughter and mom. And, of course, the daily stresses, work-related and other, of everyday life.

When I get feeling that way, I usually have to choose between pampering myself physically with some needed rest, or boosting myself emotionally with some endorphin-filled, soul-restoring activity.

I generally choose the latter or, at least, activity before rest. Because I know myself and that kind of push and ‘escape’ almost always helps … a lot.

So I got on my bicycle that morning and started riding around town, feeling more like a free-and-easy kid, than a beleaguered, world-weary adult, with each pedal.

I’m super connected with my bike and it’s one of my favorite-ever possessions. It’s a Raleigh I purchased probably at least a decade ago and was told it was one of the last made in the US, which made it a little extra special, I thought. It’s a ‘sport comfort’ bike with a fairly cushioned seat and chunky tires for both off- and on-road biking, though I’m almost always on roads. I call it ‘Sage Wind’ for its color and so I can say, “Ride like the wind, Sage” when I hop on it.

It’s also somewhat worse for wear, which actually endears me to it more. I think of it as my ‘road warrior.’ It’s a little dusty, the gears slip and stick (as it’s due for a tune-up, which I promised it this fall), some of the dials have broken, and the right handle bar grip is like tar and leaves my hand all sticky and black afterward.

But it’s my exercise pal and I love the fact that, with my own muscles, and nothing else, we can go pretty fast and pretty far into scenes that transform me and leave me happily beet red in the face, even drenched in sweat.

That morning, we took off for some of my favorite twisty, hilly, country-type roads to an idyllic little neighborhood that includes a few horses in one backyard, with some wooded trails behind that. I was wishing I had brought some carrot sticks with me when I read the familiar signs that basically convey this message: “Feed Us Carrots Only, Not Fingers.” (I don’t call it a ‘horse farm’ anymore, since a Newsday editor chastised me last summer when I admitted I might have ‘taken liberties’ when I labeled it that for a piece I wrote about the beauty of Long Island’s North Shore. I was lucky enough to get published … after they corrected the description!) 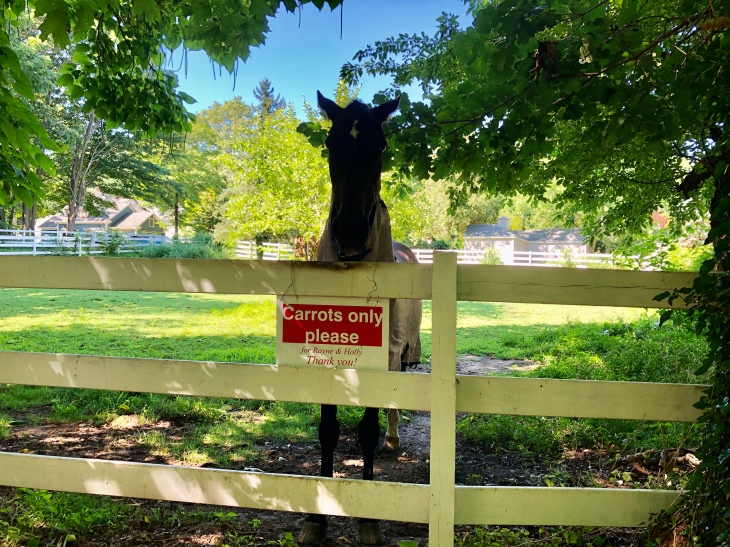 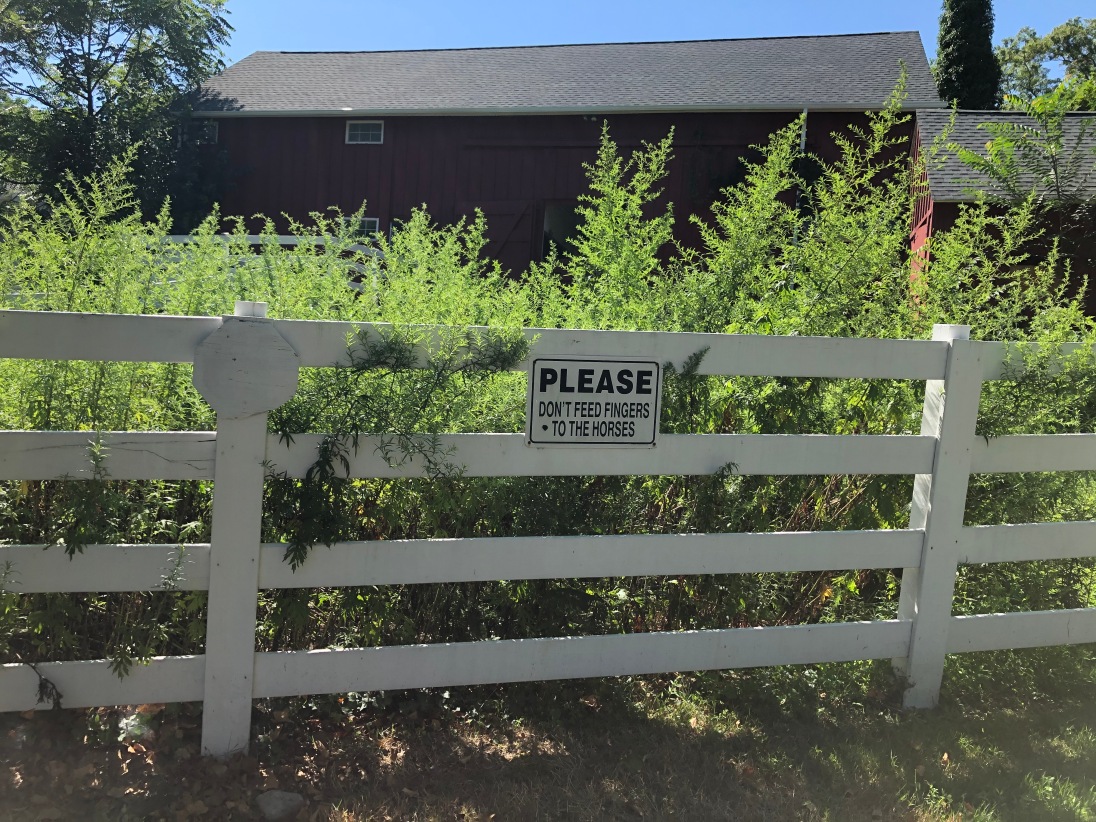 In any case, it’s just about a three-mile ride to get there but it takes me to a whole new world in so many ways. Upon arriving at the spot just mentioned, I got off Sage to visit with the horses, a couple of squirrels and a rabbit, as I propped my bike against a tree and walked around the shady little forest. I also came in contact with a woman and her adorable Airedale Terrier, who reminded me of my college friend Linda’s beloved Rollo. This one’s name was Rosey and as she bounded toward me, the owner assured me she was friendly, which I totally surmised from her sweet little licks of my hands.

Definitely feeling better, I set back for home, but took loads of detours on beautiful wide treelined streets, the local school, etc., to clock in at just over 10 miles. 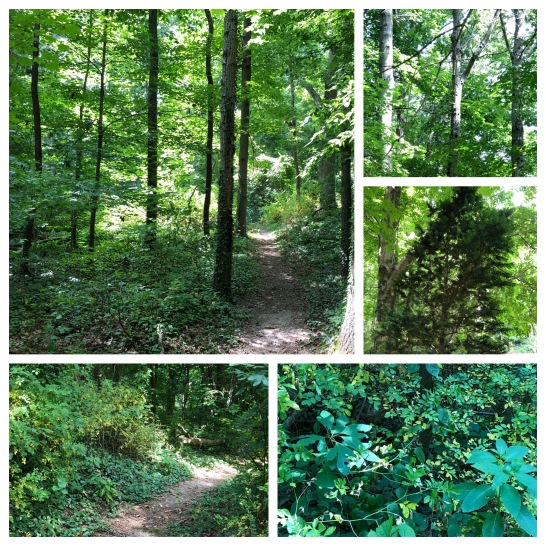 I know that because I geekily wear my old-school pedometer on my waist. And I have a ‘mini-computer’ made by Schwinn that clips to the center of Sage’s handle bars and tells me all kinds of fun facts. Like how far I traveled — 10.157 miles that morning; how long I rode — just over an hour; and average speed — 10 miles per hour. (Which I guess I could have figured out pretty easily without the device … lol!)

The main thing is I came back feeling SO MUCH better and haven’t stopped thinking about it since.

A couple of weekends ago, I took an even more epic trip with my bicycle buddy Julie that’s also continued to restore me and remind me I can still have fun amidst challenging times.

We rode about six miles each way to our nearby North Shore beach on the Long Island Sound and had the best time. She bought me a seltzer with a splash of lemonade, along with her own diet Coke. We walked our bikes back away from any crowds to a lagoon area and sat on the rocks with our feet dangling in the refreshingly cool, crisp, perfectly still and clear water. 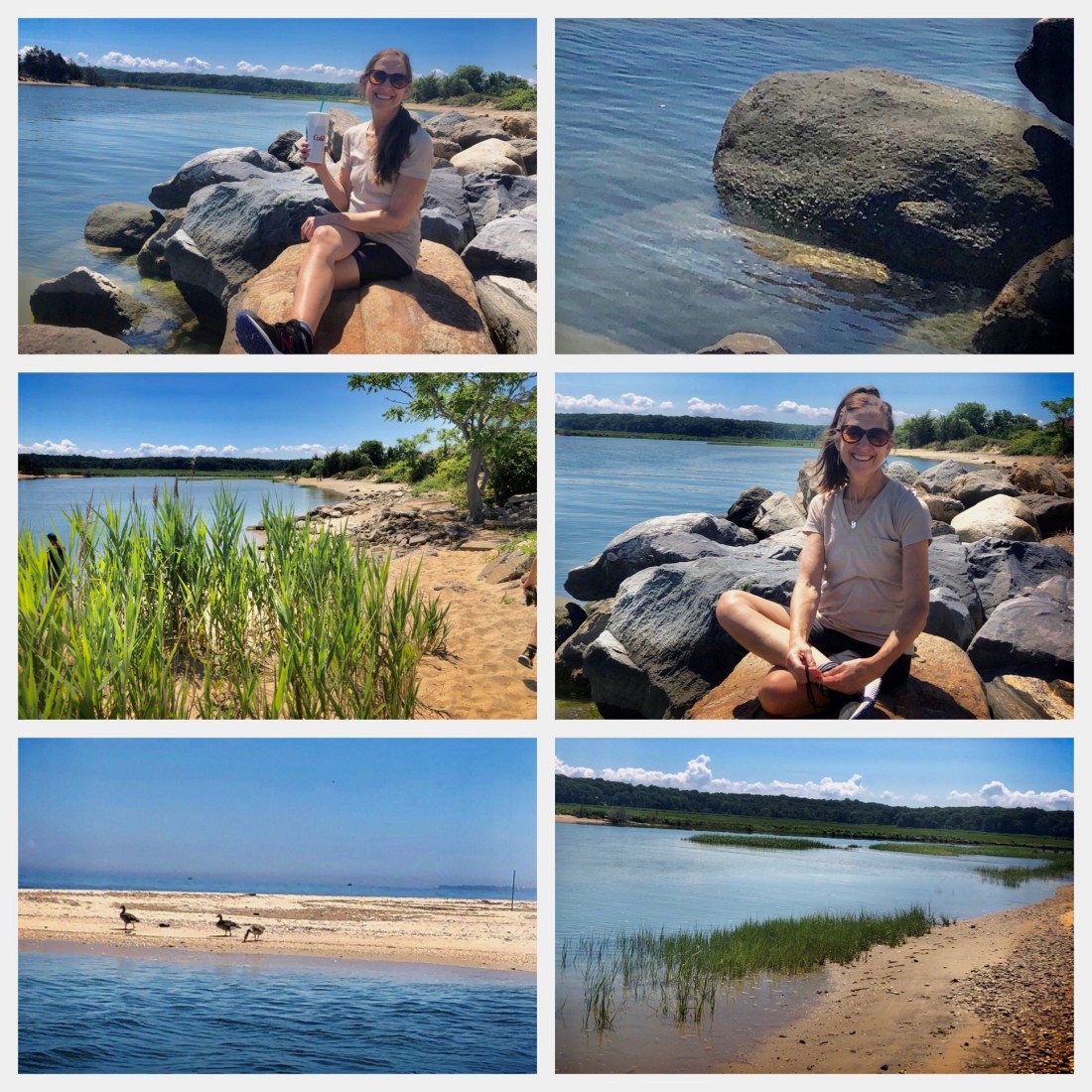 We watched little minnows swimming around; peered at some pretty stones, which we dutifully returned to their natural watery habitat; and stared at the sunny blue sky to view lots of small swallows, seagulls and gaggles of geese flying all around.

Then we turned around and battled all the uphill climbs back home. I was so proud to not have to get off and walk, even in the intense heat, which thankfully was under clear skies with no real humidity.

Julie is one of those people who is so incredibly creative and interesting to listen to, and I think that’s part of what got me up the longer and steeper inclines. She’s an amazing artist and was talking about Eastern art and Hinduism during some of the tougher climbs. It also helped that she was the one talking as we struggled up the really long hills, not me! She also has a ‘slow and steady’ mentality and can get up almost anything effortlessly, it seems, which I try to learn from, being a ‘sprinter’ at heart, which does NOT serve me well on the long climbs.

Mostly, she makes everything fun and knows the backroads to everywhere – the beach excursion includes us carrying our bikes over the local railroad tracks, which reminds me of things like young boys out on adventures in movies like Stand by Me. 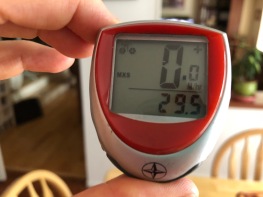 One more notable ‘solo’ ride of mine was sandwiched in-between those two, pretty close to home. I forgot how hilly it was in this particular neighborhood and did (somewhat embarrassingly) have to surrender to walking up one of the hills, further humiliated as I passed a couple talking and laughing as they easily walked down said big hill. But I did get a great payback going down a huge hill a few minutes later. Uncharacteristically for me, I didn’t ride the brake and saw my speed clocked at a record (for me) 29+ miles per hour. Seeing that actually did have me hit the brakes a little but it felt good! No wind through my helmet, but could feel it nonetheless and it was pretty thrilling.

I guess this is all to say, to whatever spirit there is out there – Thank you for life’s simple pleasures. And for the energy to break through sadness and despair with the simple act of riding my bicycle. Thank you, too, Sage Wind. Until we ride again …

4 thoughts on “My Morning Bike Ride”