My dad – Marvin Epstein – is 83 years old. Recently, he fell and broke his hip and for the past week, he’s been in bed at a Dix Hills rehabilitation facility, somewhat incoherent and agitated from pain meds.

The other evening, my mom had plans to go into NYC with a friend and I knew I should visit my dad and help him with his dinner, since his hands shake and he was anxious about being alone. I was a little stressed, since my mom is the gregarious one and I sometimes have trouble connecting with my dad.

But I knew it was the right thing to do. And being St. Patrick’s Day, I figured I would make the obvious Jewish/Irish choice – buy him a big corned beef sandwich on rye, with mustard, from a Jewish deli in Plainview, near where I work. Also a Dr. Brown’s cream soda.

When I showed my dad what I brought, I might as well have handed him a winning lottery ticket.

This simple sandwich (with a sour pickle on the side) brought back so many childhood memories for him. Like many from his generation, my dad ‘emigrated’ from Brooklyn to an apartment in Flushing when he married my mom, then with us kids 10 years later to a split level house in Old Bethpage and, about a dozen years ago, to a senior condo complex in Dix Hills.

As we shared the sandwich, he shared stories about his childhood, many of which he’s told me before. About the man selling pickles for a nickel in the schoolyard … people delivering glass bottles of seltzer door-to-door … others chopping huge blocks of ice for ice boxes (before there were refrigerators).

At one point, I thought he was in pain as he was sort of moaning. But he said, “Don’t worry that I’m closing my eyes – I am just enjoying this so much.”

And his eyes lit up after that as he said, “I have an idea!” That’s when he showed me how to make a basic version of an ‘egg cream’** – another childhood treat in Brooklyn. He had me mix cream soda with just the right amount of milk into a small plastic cup. It was one of the most delicious drinks I’ve ever tasted. And the hour-and-a-half I spent with my dad at the rehab center was one of the best times we’ve ever had.

As I was leaving, he said with a smile, “You never know what life will bring you. Who ever thought I’d be here drinking cream soda with you tonight!” 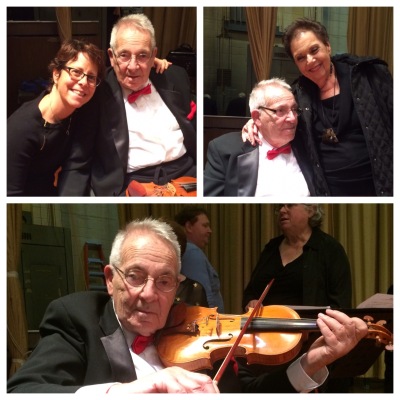 A couple of days later, my mom told me he wanted her to start bringing him his violin to play. She’s resigned, now, to ‘schlepping’ it back and forth every day, because he also told a bunch of people that it’s a $30,000 instrument! And tomorrow, they want my son Dan to come play piano there with him.

All of this gives us hope that my dad’s story – and music – will live on. And it may have all started with a simple corned beef on rye!

*Written about three years ago … happy to report my dad is still fiddling and going strong! (Some of you have seen this already, pre-blog – plenty fresh new posts to come, promise)
**A true egg cream would also include seltzer and U-Bet chocolate syrup

Watch for my next blog: Cat crazy