At the very end of the movie Almost Famous, young budding Rolling Stone music critic ‘William Miller’ asks up-and-coming rock ‘n roll guitarist ‘Russell Hammond’ what he loves about music. Without missing a beat, Russell answers, “In a word … everything.”

I kind of feel the same way.

My father’s violin playing fills my earliest memories, along with my mom’s on-and-off attempts to play the piano and, much later, the cello. I played piano and my brother violin throughout our formative years. We grew up going to classical music concerts every Saturday night, which my parents still try to attend as much as they can. (They sometimes worry these concerts, along with the bridge games and clubs they belong to, will die out with their generation – I hope not!)

I’ve had the special opportunity to hear lots of orchestras, quartets and piano recitals with my parents. Most notable for me, in my adult years, was seeing some of my classical music heroes, the likes of violinists Itzhak Perlman and Joshua Bell, and cellist Yo-Yo Ma. 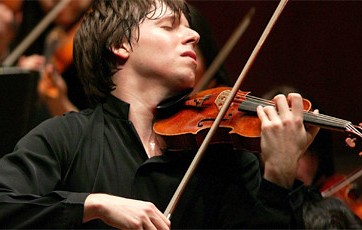 My mom enjoys many kinds of music, from pop to show tunes. My dad may occasionally give a nod to Frank Sinatra or Tony Bennett, but I know in his heart (and pitch-perfect ears), he still thinks the finest music was composed primarily in the 18th and 19th centuries.

My kids and family appreciate varied types of music, mostly somewhere on the rock ‘n roll spectrum. And Dan, as I’ve mentioned in previous blogs, shares my dad’s super passion and talent for music, playing violin, viola, piano, guitar, some banjo and saxophone and the list goes on. Jamie played violin up until she went away to college and sometimes picked up a recorder for pure fun, playing “My Heart Will Go On” from Titanic and some little (dare I say, really annoying?) tune she made up. 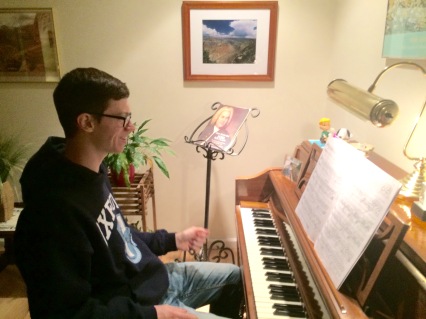 Dan increasingly loves and appreciates jazz. My dad, not so much. I’ll never forget a concert my parents and I attended at the local Tilles Center on Long Island (where I got to see the artists I named above). It was pianist Herbie Hancock with a very free-flowing jazz ensemble. I was sitting squarely between mom and dad when my dad said, “I don’t understand this music,” to which my mom replied sharply, “You don’t have to understand it, Marv, you just have to enjoy it!”

Fair enough but that was our first and last jazz foray … though I have dragged my mom to local concerts at what used to be called Westbury Music Fair, featuring more ‘mainstream’ jazz saxophonist Dave Koz with an incredibly talented group of fellow jazz musicians on guitar, drums and keyboard. We’ve also seen people like Smokey Robinson and Dan Fogelberg there.

I love a lot of music and have played guitar as well as piano, both great joys in my life. I’m not the greatest, but I get by pretty well. My favorite genre is most likely singer-songwriters, playing alt-rock, folk, bluegrass, some forms of country. I love Motown and soul and pop, too. But I think the main thing about music for me is that it’s almost always in my head. Nearly any word will trigger a familiar song lyric and get me going. And sounds – even cold water gushing out of the water cooler at work – may strike a chord and remind me of a song. (In that case, it was the iconic, sustained E-major chord played on three pianos at the same time to end the  the very last song on the Beatles’ Sgt. Pepper’s Lonely Hearts Club Band’s “A Day in the Life.”)

As I’ve also mentioned in previous blogs, I love to sing, which I do a lot when I’m alone in the car or at home with my cats. And I have the fondest memories of singing in choruses and choirs all through middle and high school.

Like Dan and my dad, when I listen, it’s not really just background. I like it fairly loud and center stage, so to speak. At restaurants or wherever, I immediately tune into songs I know and like, even if you can barely make them out in the distance. Commutes to and from work are often like mini-concerts, either of a single artist or mix CDs my kids have made for me over the years, labeled for special events like Mother’s Day, Chanukah, birthdays, even trips Jamie and I would make to SUNY Purchase or doctors’ appointments. (I know, I’m still old-school with my beloved CDs!) Some feature my all-time life favorites, like Otis Redding’s “Dock of the Bay,” Al Green’s “Let’s Stay Together,” The Beatles’ “In My Life,” The Beach Boys’ “God Only Knows” and Jackson Browne’s “The Pretender.” Others are collections of all the artists I’m currently listening to, with my favorite of their songs all randomly mixed together, the likes of Elvis Costello, Dave Matthews and Sheryl Crow.

One is a pretty cool CD I called Beginnings where I have all kinds of favorite singers and groups performing the first song that turned me on to them. On it you’ll hear Cat Stevens’ “Wild World,” John Denver’s “Rocky Mountain High,” Three Dog Nights’ “Shambala” (which I heard endlessly on my first clock radio in 1972 or so, when we moved from Queens in New York City to Old Bethpage, Long Island). You’ll hear later discoveries like Sam Bush doing “Same Ole River,” which he sang and played on mandolin as part of Lyle Lovett’s Large Band at another Westbury Music Concert we attended with friends. It was love at first listen and I’ve grown to be one of his biggest fans (as in ‘fanatics’!). Another CD features Artists Finding Their Voices Again highlighting the enduring talent of people like Bob Dylan, Kris Kristofferson, Neil Young, as well as artists like Paul Simon, who just keep growing and changing to their own muses.

Jamie and I will listen, and belt out the words, to our own favorite classics like Cher’s “Gypsies, Tramps and Thieves,” Neil Diamond’s “Cracklin’ Rosie,” Gladys Night and the Pips’ “Midnight Train to Georgia” (where Jamie knows every Pips nuanced little verse by heart) and The Supremes’ “Love Child,” again with no refrain or background vocal left unrepeated or unsung (“Tenement Slum, Tenement Slum,” for example).

When I’m alone in the car, I’m often ‘rehearsing’ (for what I don’t know!l) – but I will play certain songs over and over until I can sing every lyric right along with the singer.

The main point is music enriches my life, every day in every way, and I probably take it for granted, which is why I wanted to share this particular blog. And I’d like to end by echoing something that is widely acknowledged now: the healing power of music for people in pain and even despair. 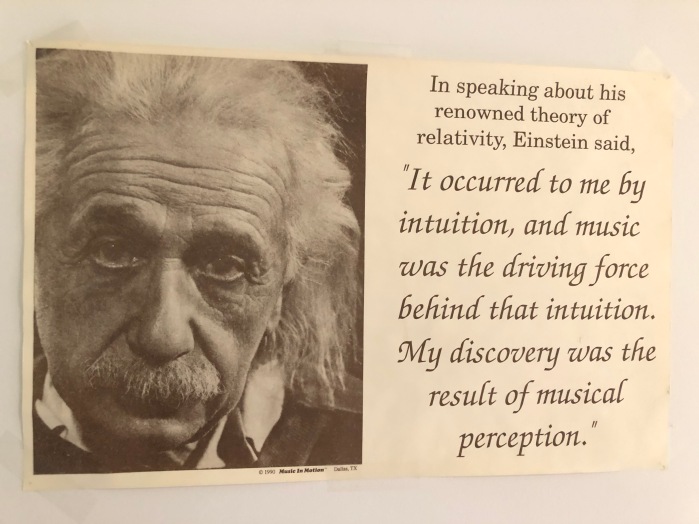 My dad has been in an assisted care facility for the last several months and some of the sunniest moments we’ve seen there have come from music, for him and the other residents. One was when members of dad’s previous Senior Pops Orchestra came to play. My mom said a woman who had never seemed at all alert was joyously conducting the violin and cello music with her hands. Another was smiling and remarking he was happy to hear classical music. I got to see some of the members enjoying, too, a singing guitarist engaging the residents with songs from the 1950s, like “Mack the Knife” to some delighted applause, again a rare event.

I know my dad’s health took a downward slide when he recently stopped playing violin himself, at age 89. But I hope the music continues to flow somewhere inside of him and that he’s able to still feel moments of calm and joy from its effects. I know he gave that appreciation to me and my family and I try to remind him of that legacy whenever I can.