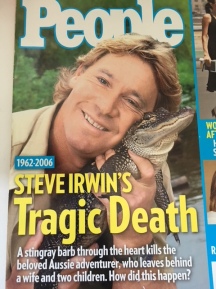 Twelve years ago – on September 4, 2006 – we tragically lost one of my family’s all-time heroes. The world still feels smaller to me without him.  And it still hurts me to my core to think about how Steve Irwin – naturalist, famed ‘Crocodile Hunter’ of Animal Planet TV, and owner of the Australia Zoo – died suddenly from a stingray attack while filming footage for his daughter Bindi’s planned new TV show.

He died like he lived – in action, in nature, doing good, and working to educate others about the beauty of nature and all its creatures. Ironically, he died after deciding not to undertake a more dangerous-sounding filming that day among ‘deadlier’ creatures and in rough ocean waters. Somehow, though, the normally docile stingrays delivered Steve’s final, deadly blow.

He leaves behind a legacy, with his wife Terri still running the zoo, Bindi carrying the torch of giving the world ‘exciting education’ and teenage son Robert also involved in the family’s naturalist ways.

So that’s a little history, in case you didn’t know. But I want to talk about how fully he lived his 44 years.

The thing that enamored my family and me to ‘Steve-o’, as he was lovingly called, was his over-the-top, non-stop enthusiasm, fun and ‘just do it’ attitude. He had pure passion, with a purpose. It’s that ‘be who you are’ – no matter how goofy – love of life that always inspires me and draws me to people. 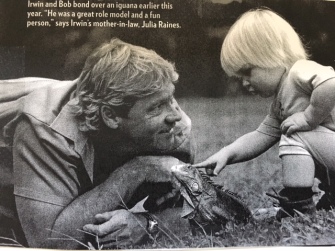 What brought Steve Irwin to new heroic heights for me, though, was his absolute love for every living creature on earth. And his undying desire to share that message with the world. He used the catch phrase ‘What a beauty‘ (in his distinct Australian accent and face really close in on the cameras), to describe everything from deadly snakes, spiders, lizards and scorpions to more traditionally ‘loveable’ animals like koala bears and kangaroos.

They were all beautiful to him. He embraced every one, and treated them with equal dignity. He knew, and respected, the rules of the game. They had their instincts to follow and he was encroaching on their territory. Anything they did was fair game and, well, in the nature of things.

I think that respect for diversity is a great lesson for all of us – in how we treat animals and our fellow human beings. Recognizing that every one, and everything, on earth has its own distinct purpose.

Wrestling crocodiles was Steve’s main ‘thing,’ following in his father Bob’s footsteps. He wrestled them to move and save them from poachers and other dangers. (I actually always thought he should have been called the ‘Crocodile Saver,’ not the ‘Crocodile Hunter.’) He brought the world an appreciation of these animals. And he loved them precisely for the strength and power that would scare almost all of us far away. 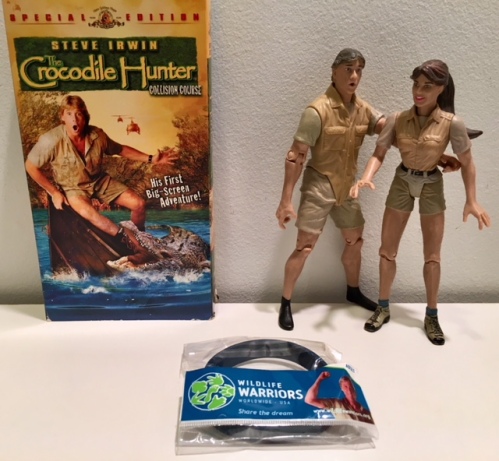 My family was bitten by the Crocodile Hunter bug big time in its prime, in the late 1990s. Like so many other things, it was our daughter Jamie who discovered him for us and who led us on a really great run of TV shows, movies, action-figure collecting, you name it.

Steve may be gone. And I know I’m among millions of others who continue to mourn and question such an untimely demise for such a one-of-a-kind natural treasure. But I also feel certain Steve Irwin would want us to heed and live by the messages he devoted, and literally gave, his life to spread. To be ‘Wildlife Warriors’ in our own right. As he used to always say, too, ‘My mission is conservation!’

So here’s to you Steve-o … a tribute in words and a promise to do what I can to live up to your ideals.

One thought on “Remembering Steve Irwin”